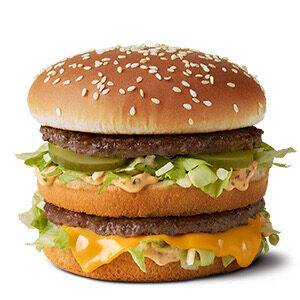 On a sesame seed bun

Remember singing the song?  There were ads and contests of people trying to sing it and say it as fast as they could.  It ain’t easy!  But it is well known.

When the Big Mac originated in Uniontown, Pennsylvania in 1967 it went for 45 cents.

So think about what your $4.00 is paying for when you buy a Big Mac.

Let’s break down the cost of what goes into it:

….in other words, what does McDonald’s have to pay for in order to put the Big Mac together and to deliver it to you while you are in your car at the drive-thru or at the “window” as it is professed at Hamburger U and known to McDonald’s crew…..for everybody else it’s the counter where you walk up to order inside the restaurant.

An ounce of something close to thousand island dressing

An ounce or so of shredded lettuce

One slice of American cheese

A teaspoon or so of minced onions

Ok, for you accountants, you know that the items above make up what is known as COGS, or Cost of Goods Sold – basically, non-overhead input costs.

Now we have the rest of the cost of your Big Mac, which includes, but is not limited to:

The box it goes into

The bag it goes into

The people who cooked the meat and prepared the buns with condiments etc.

The person who took your order and payment (or the kiosk)

The electric, gas and water in the kitchen area

All of the sponsorships McDonald’s has around the world

The sprawling campus in Oak Brook, Illinois including Hamburger University

And much, much more…

Now, think about what goes into the cost of your health insurance.

You have no idea.

You can’t see it.  You can’t touch it.  The insurance company doesn’t have a song for it.

Stick with me and learn how your health insurance is priced.  It’s important and you need to learn, so you don’t have to spend more!

If you do it right, you might have enough saved to open your own McDonald’s.